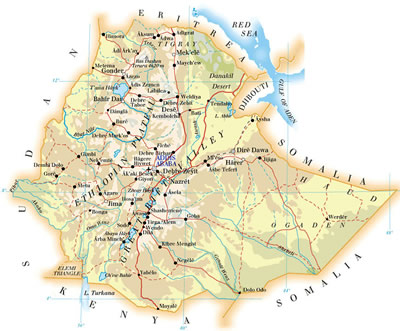 Visiting a new country always brings a new set of circumstances and a different way of life. That’s why we travel, isn’t it? Here’s a bit of information to make your stay as smooth as possible.

With more than 80 ethnic groups in Ethiopia come just as many languages. The main working language is Amharic, a Semitic language with its own unique alphabet and numbers. The alphabet consists of over 200 unique symbols, or fidel, each representing a syllable, usually a consonant and a vowel sound together.

Amharic numbers are rarely used, mainly due to the lack of a character for zero (0). Rather, Indo-Arabic numbers are used, which is the same as in the Western world (1, 2, 3, etc).

Other widely spoken languages include Oromifa (Oh-roh-mee-fa) in the Oromo region and Tigrigna (Tee-gree-nya) in the region of Tigray.Department of Chemistry. Department of Geology.Institute for Climate change and Adaptation. Centre for Biotechnology and Bioinformatics. School of Computing and informatics.

The local currency is the Ethiopian birr. US dollars, Euros and GB Pounds can easily be exchanged. ATMs are available in Addis Ababa (Visa only) and in a few locations outside of the capital, though these should not be relied upon One birr noteas they can often be out of order and/or money. Visa users can also take cash advances at Dashen Bank branches throughout the country. Mastercard users can take a cash advance at the United Bank in the Hilton. Few hotels accept credit cards, and where they do, it will be visa only (except for the Hilton and Sheraton in Addis Ababa). Traveler’s checks are accepted in some locations, but travelers should bring the purchase receipt with them.

Remember to keep your receipts for ATM transactions or currency exchanges. You will need these in order to change any remaining birr to foreign currency before leaving Ethiopia.

Ethiopian Telecommunications is the sole provider of phone, mobile and internet services. SIM cards are difficult to obtain, but may be rented for the duration of your stay. Roaming services using international mobile SIM cards is rare. International phone calls and fax services are available in Addis Ababa and various locations around the country.

Internet cafes are widespread throughout the country, but connection speeds are mainly dial-up and can be very slow. Broadband connections are available in Addis Ababa but may vary in quality.

Ethiopia’s postal service is reliable, though can be slow. Post offices are generally open Monday – Friday from 8:30am to 5 or 6pm, but desks may actually close at 4pm and during lunch time. They are generally open on Saturday mornings as well.

Accommodation can vary widely in quality and price throughout Ethiopia, ranging from local standard to 5-star hotels in Addis Ababa. Camping is also available in certain locations, with amenities also varying in quality and availability. Particularly during festivals and high tourist season, reservations are recommended. It should be noted, though, that simple reservations via email or over the phone are not always honored. The best way to ensure a reservation is to pay in advance and keep all receipts. Abeba Tours does its best to match its guests with their accommodation preferences.

The staple of every Ethiopian meal is injera, a spongy pancake-like bread. The injera is laid on a large platter with the main dish on top. Small pieces of injera are then torn off and used to pick up bite-size portions of the main dish. Ethiopian cuisineInjera is made from the local grain teff, mixed with water and allowed to ferment before it’s cooked on a large, flat pan. Dishes eaten with injera include a variety of meat (beef, lamb and chicken), stews (known as wat, they may be spicy or mild) and vegetables. A variety of international cuisines are available in Addis Ababa but may be less widespread outside the capital. Generally, pasta is always available.

Short-term guests are advised to drink bottled water to avoid any stomach discomfort during their stay. Soft drinks are wide-spread as well as fresh fruit juices. Coffee lovers will be delighted as Ethiopian coffee is some of the best in the world.

A variety of local Ethiopian beers are available as well as some locally-made wines. The local alcoholic beverages include tella, a local beer made from various grains, tej, local wine made from honey, and areki, a hard liquor made from maize.

Known as the Roof of Africa, much of Ethiopia sits in the highlands, between 1800 – 2400m. This keeps the climate temperate, with warm sunny days and cool nights. In the south the weather is particularly warmer, but the nights may still be cool. Rainy season is from June through September with a short rainy season in February and/or March. The Danakil Depression is hot year-round, with temperatures often exceeding 50 degrees Celsius.

Ethiopia follows the Julian calendar, which makes it approximately 7 years behind the Gregorian calendar (used in most of the Western World). The calendar consists of 13 months – 12 months of 30 days and a 13th month with 5 days (6 in leap year). The Ethiopian new year is September 11th. September 11th, 2008 rang in the year 2001 in Ethiopia.
As with many equatorial countries, Ethiopia tells its time 6 hours different from Western time. This is generally based on the rise and set of the sun, which had little if any variation throughout the year. For example, 7am is Ethiopia’s 1am, while at noon, Ethiopians would say 6:00. While most Ethiopians will “translate” their time into Western time when speaking English, it is always advised to confirm whether the time given is “Ethiopian time” or “European time” in order to avoid any confusion.

With proper precautions, visitors to Ethiopia can enjoy a healthy stay. All visitors are recommended to have travel insurance, and Abeba Tours operates under the assumption that all of its clients have done so.

Woman and baby girlIt is recommended to obtain recommended vaccinations before arrival, including Yellow Fever, which is required. Malaria is present in low-lying areas, so proper precautions should be taken. There is no malaria in Addis Ababa and most highland locations in the northern part of Ethiopia (except Bahir Dar, where there is a malaria risk).

Water should always be boiled or treated before drinking. Alternatively, bottled water is always safe. Visitors may be cautious when eating raw vegetables or salads that may have been washed in local water. Food should always be eaten freshly cooked. Remember the traveler’s mantra: “Boil it, cook, it, peel it, or forget it.”

Most necessities are available in Ethiopia. It is recommended to bring warm clothes for cool evenings, long-sleeve shirts and trousers (for protection against mosquitoes), insect repellant, sunblock, first-aid kit, rain gear (if coming during rainy season), flashlight or headlamp (for power outages), water filter or purification tablets (if not drinking bottled water).

Ethiopia runs on 220V, and uses 2 round prongs (such as those in Europe). However, this may vary from time to time (size of prongs and/or width between prongs). An adapter is advised, and are widely available throughout Ethiopia.

Despite its cultural richness, Ethiopia remains one of the poorest countries in the world, with a large percentage of its population living in poverty. This has led to a large number of beggars and street-dwellers, particularly in Addis Ababa. Supporting these beggars unfortunately does not help the situation, but can rather often make it worse. We therefore advise guests to support a local organization instead of giving handouts, including candy, pens and clothes to street children. In Addis Ababa, guests can buy meal tickets from Hope Enterprises (located on Churchill Rd.) and distribute them to those who approach them. Hope Enterprises serves over 200,000 meals every year.
Another form of begging, particularly in the countryside, may also be called the “Highland frenzy”. Highland was the first bottled water in Ethiopia, and it has become synonymous with the plastic bottles, which are highly coveted. This “Highland frenzy” often involves children running after fast-moving vehicles in hope that a plastic bottle will be thrown out to them. This creates a very dangerous situation of children running in front of the vehicles with dire consequences. We therefore ask our guests to refrain from the practice of throwing them out of the vehicles at the children, but rather give them to a hotel or restaurant in a local village.

It is recommended to always ask before taking a photograph of any person. Many people will happily oblige, but others may not want their photos taken, and that should be respected. Often times, people might ask for a fee (1-2 Ethiopian birr) to take their photo. You should always negotiate the price before taking the photo. Of course, you may also opt not to take a photo if you don’t agree with the price, terms, or the practice.

Ethiopia remains a very safe country for travelers. There are, however, some basic precautions to consider for safe travels. Always watch your belongings and beware in large crowds of pickpockets. Particularly in Addis Ababa and in the mercato and stadium areas, pickpockets operate in large numbers. Use common sense and keep all moneys in a money belt and all valuables in your hotel safe.
A common scam is that of people (often students or self-appointed guides) inviting guests to a coffee ceremony or other small gathering. People are often taken to a local home where coffee, tej, and maybe local food is served. After the fun, the guests are handed a bill of often the equivalent of $100 or more, and forced to pay. We recommend against talking to people who approach you on the street and attending such events. If you are interested in a local coffee ceremony or traditional dinner and dance, we will be happy to entertain you.

The following are holidays in Ethiopia for which governmental offices are closed: